The Road to Independence 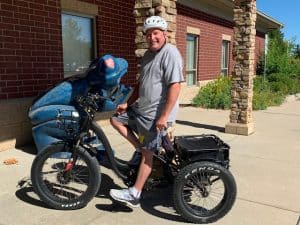 After his lengthy career as a prestigious Journeyman builder reached its verge to the gable Bill was faced with a different kind of uphill challenge – a diagnosis of macular degeneration, the leading cause of vision loss in the country. Read Bill’s story.

The Eyes of an Artist

The old phrase “can’t see the forest for the trees” applies to Napoleon artist Mike Sager, but in a very different way. Read Mike’s story.

Let Me Tell You A Story

A client finds his voice after losing his sight

“Losing my sight was the best thing that ever happened to me,” said Michael Christie. This Toledo resident and former Sight Center client was only somewhat serious when he uttered those words at the Lions Club Christmas party in December.

Michael, who has a background in sales promotion and marketing dating back to the 1970s, had been a frequent public speaker. His topics included “The Serious Business of Being Funny,” a talk about improving the effectiveness of business communications by sprinkling in some appropriate instances of humor.

In 2003, Michael was diagnosed with diabetic retinopathy which is the leading cause of permanent vision loss in the country. He underwent a number of laser and surgical treatments to address the symptoms. In 2008, a detached retina left him with seriously impaired vision in his right eye. In 2011, he began receiving disability insurance from the Social Security Administration.

The Sight Center provided assistance to Michael with  equipment and training. He received hand held and desktop magnifiers in addition to valuable instruction in homemaking and occupational skills. He also learned new computer skills which he calls “life changing.”

In one memorable visit, Michael recalled The Sight Center occupational therapist working with him to label his stove. Using a dab of brightly colored fingernail polish, she marked the simmer location on the burner dials. Since services were tailored to Michael’s needs and lifestyle, she also marked two important settings on the oven dial – 350-degrees to bake a pizza and 250-degrees to reheat it. He recalls a humorous anecdote from his visit, Michael said, “She left the nail polish for me to use elsewhere, which raise some questions when my brother visited later that day!”

Energized by his new-found confidence, Michael joined the Westgate Toastmasters Club in 2013 to rekindle his love for public speaking. Thanks to the assistance and training he received from The Sight Center, Michael remains an active member of the Toastmasters group.

Losing his sight wasn’t planned, but it did force Michael Christie to take a closer look at his life. Today, Michael’s diabetic condition is under control, his vision is stable, and he is enjoying life. He continues to find joy in storytelling and public speaking. In recognition of the impact The Sight Center has had on his life, Michael has offered to share his story for community presentations.

The King And Eye

When Jacob King attended The Sight Center’s presentation on his Rhodes State College campus back in November 2015, he had no idea it would change history. King is an Assistant Professor of Humanities at the Lima-based institution, is visually impaired.

After the program, King spoke with The Sight Center’s Executive Director Stacey Butts and Development Coordinator Tim Tegge, expressing a desire to empower the local communities served by the Toledo-based agency. “We may have been founded in Toledo and located there, but our mission calls us to serve all of northwest Ohio,” Butts said. Tegge recalls, “I remember asking what The Sight Center would look like if it didn’t have a building, and the answer was clear – strong relationships in every county.”

The initial meeting with Professor King led to other meetings in 2016 which resulted in the formation of an Allen County Low Vision Coalition in 2017. Under King’s leadership, the group has grown to several dozen participants. In addition, the Low Vision Coalition has organized numerous social, educational, vocational and recreational events for members and for the community, including a regular Blind Bowling night at a local Lima bowling alley.

“At the end of the day,” Ms. Butts said “The goal is to have more people getting the help they need to live the kind of lives they want. Thanks to Jacob King, we’re doing that in Allen County.”

“I Don’t Have To Be Afraid Anymore”

Rhonda Shaw’s has mild vision impairment, which is a combination of eye disorders that have prevented this 60-year old Bluffton resident from being able to drive, read, travel safely at night and recognize faces.

Born with severe astigmatism, ocular albinism, contrast sensitivity and myopia, all of which can cause visual challenges. Rhonda’s life became more complicated by the onset of macular degeneration in her dominant eye. Rhonda lost her job and eventually gave up her driver’s license in 2002. For the next 15 years Rhonda’s world grew smaller as her confidence shrank. Problems with depth perception, led to several falls during the day, turned a normal flight of stairs into a dangerous obstacle at night.

While attending a low-vision event in Lima, Rhonda met representatives from The Sight Center. The Sight Center empowered Rhonda to broaden her world and take charge of her own life. With proper lighting, magnification, and training on how to use a white cane, she began to do the things she hadn’t done in years.

Reflecting on the experience, Rhonda says “The Sight Center understood it wasn’t just about the my visual acuity but how these conditions affect my ability to stay independent.” Rhonda is once again exploring her world on her terms. “Until you showed me how to use a white cane, I didn’t have a life after dark” she said, adding “I don’t have to be afraid anymore.”

When Jen Reynolds learned she had Stargardt disease, she didn’t crumble, but went into action. Driven by an innate optimistic personality and fueled by eight years of military training, this 38-year-old Lucas County resident saw the diagnosis as her new mission.

After a lifetime of perfect vision, Jen started noticing subtle changes a couple years ago. While taking American Sign Language classes to become an interpreter, she would occasionally miss some of the signs. “It’s like there had been a missing piece of what I had seen” she recalls. Another incident occurred while applying eyeliner. “It was harder to see what I was doing when looking through my right eye only” said Jen.

On October 20, 2017, Jen scheduled a routine eye exam. Thinking she finally needed glasses after 39 years, she was confused when her eye doctor ran so many tests. That’s when she heard the words “Hereditary Macular Dystrophy” and was referred to a retinal specialist.

Eager to research the condition and learn as much as she could, Jen determined she has an early onset form of macular degeneration called Stargardt disease. This self-diagnosis was confirmed by her retinal specialist the following week. Stargardts, which usually manifests itself in early childhood, typically leads to legal blindness. “I have decided to remain positive through all of this” she states, adding “I know I can adapt and overcome as the military has taught me.”

A recent visit to The Sight Center opened Jen’s eyes to a new world of low vision devices, adaptive techniques, and assistive technology solutions. “I want to start learning as much as I can now while I still have more vision” she said, adding “I’m already planning on getting an iPhone!”

Looking at the world through her new eyes and her same old optimistic lenses, Jen Reynolds said “This journey has introduced me to many new amazing people I would have otherwise never met”, quipping “I only SEE that as a gift!”

Walk By Faith, Not By Sight

Many of us remember Sister Linda Maria Pelagio (pictured with WTOL Meteorologist Chris Vickers) from the inspired invocations she delivered before the last two Sight Center Dining in the Dark galas. But few of us know the journey this Philippine-born member of the Sisters of Notre Dame, a source of hope for countless people, including many who are blind or sight impaired.

Born in the Philippines, Linda Pelagio was blinded by a severe reaction to penicillin at the age of six. While attending school, she became fascinated with a teacher who was a nun, and hoped that one day she could become like this holy woman. Her grandmother told her that if she wanted to be a holy sister, she must pray every day, saying “if you are called, you must trust in God.”

In 1987, she traveled to the United States to participate in an international blindness conference in Missouri. This led her to the Columbia Lighthouse for the Blind where she was encouraged to pursue her dream. She applied to 16 Catholic religious communities to become a nun, but only  the Sisters of Notre Dame in Toledo, Ohio, welcomed her to join their order.

While serving in her first ministry as a Notre Dame sister at the Kateri Center, Sister Linda earned a Master’s degree at the University of Toledo. Since her keyboarding skills were not strong enough she was referred to The Sight Center where she quickly became a proficient typist. She also received occupational therapy, daily living instruction, training on using household appliances, and braille writing devices.

In 1989, she helped start a support group for people who are visually impaired known as InnerVision. The goal was to provide spiritual enrichment, social activities, and educational opportunities in an ecumenical environment. Over the years, the membership has grown to 80. Sister Linda said the name came from the feeling that “we may have lost our sight, but we will never lose our inner vision.” The group continues to meet monthly at the offices of the Diocese of Toledo.

Through her years of service to numerous local social service organizations, Sister Linda has relied on The Sight Center for everything electronic. “They are a great resource for computer training,” she said, adding, “When I am stuck with my smart phone, they help me through it. All of my electronic skills came from the people at The Sight Center.”

In spite of her vision loss, or possibly because of it, Sister Linda’s light shines brighter than ever. Whether she’s attending an InnerVision meeting, counselling families in the Mercy St. Vincent Hospital Spiritual Care Center or meeting with residents in the John H. McKissick senior apartment complex in South Toledo, Sister Linda Pelagio keeps doing what she’s been doing her entire life – walking by faith, not by sight.